Designing “CEDS by the Numbers”

Designing "CEDS by the Numbers" 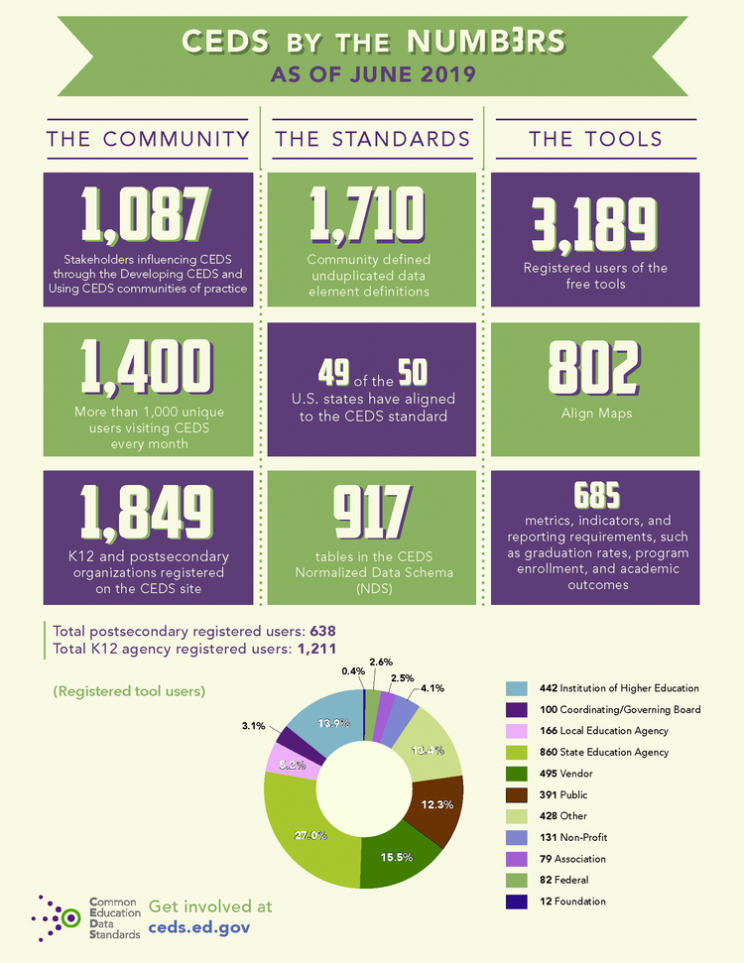 Common Education Data Standards (CEDS) is an education data management initiative with the purpose streamlining the understanding of data within and across early learning, elementary, secondary, postsecondary, and workforce (P-20W) institutions and sectors.

The infographic serves as a quick update for the CEDS community on the status of the initiative. It also serves as a reminder to potential users of CEDS’ helpfulness to a variety of education stakeholders for a variety of data-related purposes. Featuring the softer hues of CEDS’ new color palette, which QIP created, the design incorporates an appealing grid that resembles a tic-tac-toe board, along with a doughnut chart. The infographic lays out the hard data on how far CEDS has come since its inception years ago.

QIP worked alongside subject matter experts to create the content for the infographic. Once the content was established, QIP distilled the information to make it accessible to a lay audience using plain language and data visualization best practices. The content identified focuses on concise numeric values of interest to people who would like to know who uses CEDS and how, as well as people considering joining the growing CEDS community.

To complement the content of the infographic, QIP’s team of designers provided several concept choices to make the information visually engaging and easy to skim. Several sketches were created to show potential ways to organize the content. Eventually, a tidy grid structure and muted colors were chosen, with each number in its own section for easy reading. The infographic was designed using a combination of Adobe Illustrator and Adobe InDesign.

With the basic content and design concept complete, our designers worked closely with the client’s subject matter experts to generate several iterations of the graphic. Several rounds of review occurred, during which the team made changes to the details of the design and the organization of the text. Edits were made to the text and the design to ensure proper messaging, use of plain language, and a visually appealing final product.

Once the infographic was approved, QIP’s design team made a final high-resolution version of the infographic in JPG and PDF formats. The PDF was made Section 508 compliant (accessible to users with disabilities) using Adobe Acrobat. The infographic was posted on Twitter, where it produced successful engagement with followers.