Education and Career Pathways: Maps for Learning and Job Success

Recent statistics show a mismatch between the skills secondary and postsecondary students are acquiring and the rapidly changing needs of industry. In June 2018, the Bureau of Labor Statistics reported that U.S. job openings had increased to 6.6 million, while the number of unemployed people was down to 6.3 million. According to the 2017 ExcelinEd white paper Putting Career and Technical Education to Work for Students, “Many of these open positions offer middle- and higher-wage salaries, as well as opportunities for continued training and advancement by employers, but they go unfilled due to a lack of appropriately skilled workers who have completed aligned programs of study.” Pathways data—data that help students navigate through different points in their education and career trajectories—can help solve this problem. These data define not just the routes to success (that is, to the desired destination), but also the milestones along the way. 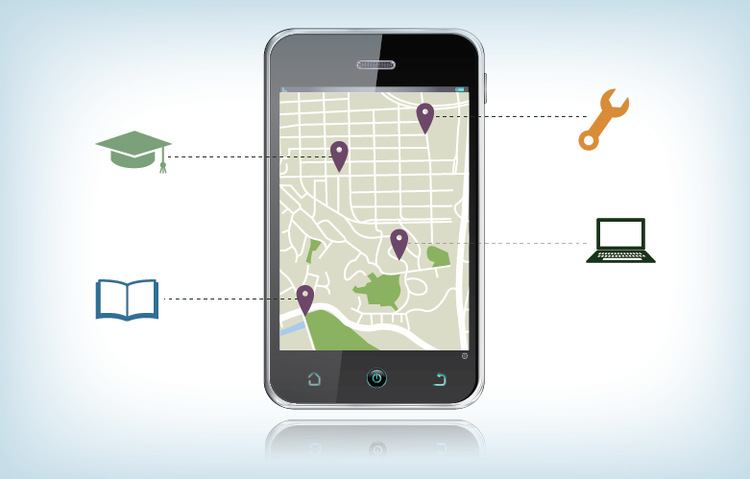 It is clear from these reports that current students and education providers could use better alignments to the most promising opportunities in higher education and the workforce. At the macro level, we see gaps between what students are learning and what they need to learn to transition into the college programs of study and work positions that are available. At the micro level, a student’s skill gap in any area (for example, proportional reasoning) becomes a roadblock for learning further skills that depend on that prerequisite understanding or ability (for example, operations with fractions, word problems, and physical science applications). The lack of well-defined education pathways data—and the failure to use the information that is currently available—is limiting opportunities for students, employees, and employers.

There are four kinds of pathways that serve different purposes:

Visualizing pathways as a map

Although the four kinds of pathways have different purposes, their structure looks the same. In each case, the information can be visualized as a map. Points of interest on the map, called milestones, can represent

Visualizing pathways as a map

Although the four kinds of pathways have different purposes, their structure looks the same. In each case, the information can be visualized as a map. Points of interest on the map, called milestones, can represent

While these different types of milestones can all be points in a pathways map, the metadata for each will be different, depending on type. For instance, a credential milestone will have different metadata properties than a competency milestone.

A path is a connector between two milestones. Paths, similar to road segments on a street map, represent recommended ways someone can navigate from point A to point B. On a pathways map, a path shows how to get to a slightly more advanced milestone via its prerequisite milestone. Figure 1 shows the relationship between two milestones and a path. 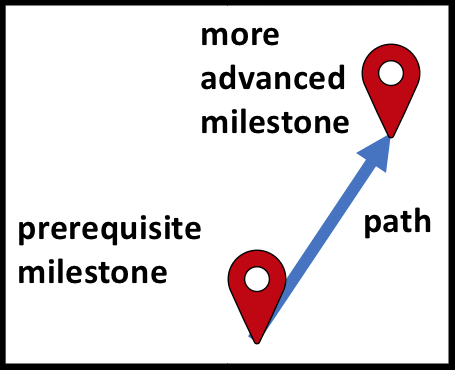 A pathways map can be formed by connecting many milestones and paths. People can then select routes based on interests and needs. A career pathways map in nursing, for instance, may have several possible routes. There could be an entry-point milestone of a high school diploma, with two paths leading from there, one to a Licensed Practical Nurse (LPN) qualification and another to an Associate Degree in Nursing (ADN) to qualify as a Registered Nurse (RN). Another path could lead from the LPN to the RN. The LPN and RN could each have a path to a Bachelor of Science in Nursing (BSN). All of this creates many possible routes and destinations (illustrated in figure 2). Additional routes could be created, thus expanding the map, by adding paths from the BSN to graduate degree qualifications for other positions in health care.

Note that, unlike a street map, a pathways map is unidirectional. While people commonly travel from point A to point B and then back to point A, they do not travel from a more advanced milestone to its prerequisite. Of course, people may need to relearn a prerequisite they either missed or forgot in order to advance; they may also decide to double back and change routes. But they will never begin at a master-level job and move from there to a basic internship in the same field, or start by learning differential equations before moving on to addition and subtraction.

QIP team members are working with teams from edtech initiatives (such as those mentioned in my recent EdSurge article on initiatives working on learner navigation) to help define standards for pathways data that will serve all levels of education, training, and careers. I will be facilitating a session on this topic at the upcoming National Defense Industry Association (NDIA) iFEST conference in Alexandria, Virginia, on August 27–29. See also my video Demystifying Pathways Data on YouTube for another look at education and career pathways. 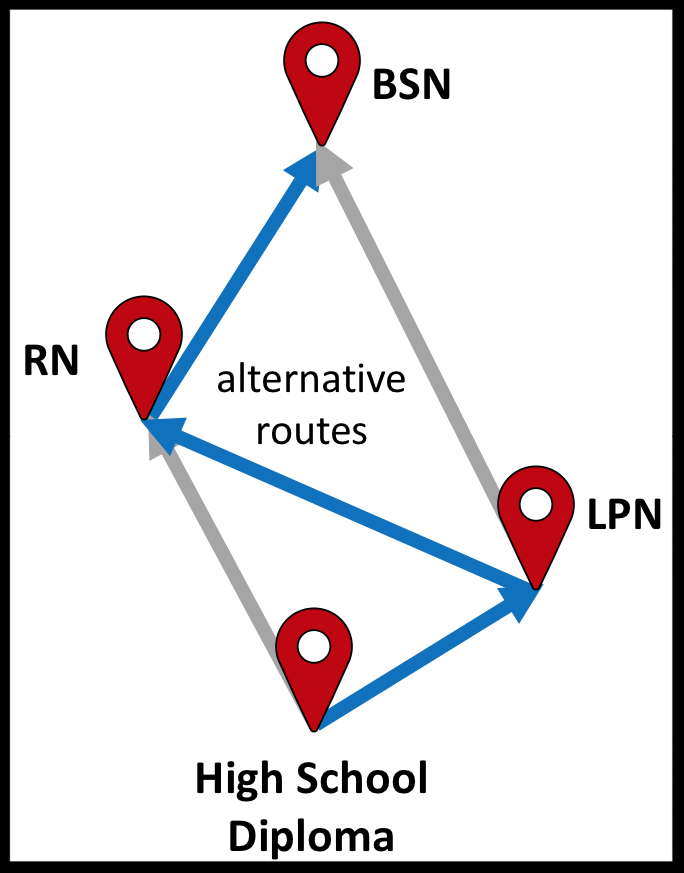 Figure 2. A pathways map can have multiple routes (which are also called routes on a street map). The route in blue represents one of many education/career possibilities in nursing. 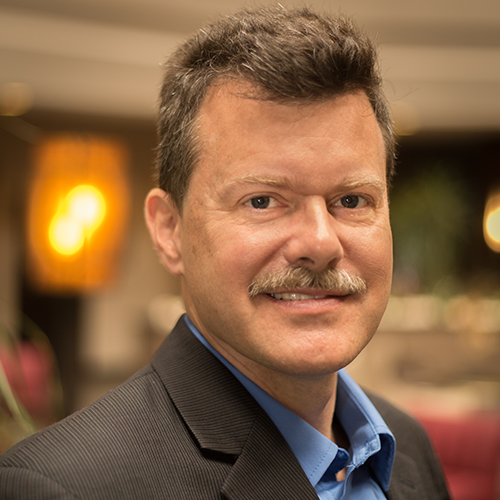 Jim Goodell (@jgoodell2) is Senior Analyst at QIP. He works on connections between education sciences, policy, practice, and personalized/optimized learning. He wrote Turning ‘Google Maps for Education’ From Metaphor to Reality for EdSurge. Learn more about Jim here.

◀What To Expect at the STATS-DC Education Data Conference
Education and Career Pathways: Data Standards▶
Skip back to main navigation