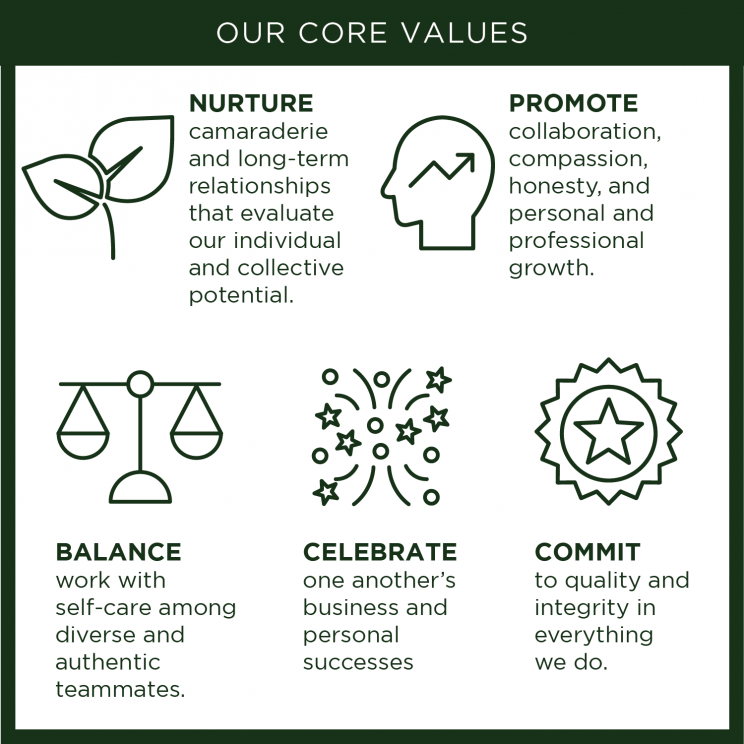 Standard operating procedures are critical to the efficiency of most organizations. But real success in business (and life) also requires a thorough understanding of one’s values.

In 2017, QIP had been in business for more than a decade, and we knew intuitively what we stood for and how we engaged in work activities. In addition, we had many written documents that codified different aspects of our business—a website, an employee handbook, and marketing materials. We also had years of experience in assisting clients, hiring employees, and managing a growing team. However, QIP had not yet established its core values.

Staff knew that QIP had many informal values that we acted upon daily, but these values weren’t formally expressed in words or in writing. We realized that adopting a set of company core values would not just reinforce who we are to our current employees and clients; it would also make a statement to prospective employees and partners about how we do business and why we are successful.

A scary and messy idea

Because one of our most cherished values at QIP has always been to avoid a top-down management style, we realized that our core values would be more authentic, meaningful, and accurate if we involved our entire team in the development process. This felt like a scary and messy idea. It would be so easy for senior managers to simply craft core values and announce them. What if all employees engaged in the creation process only to discover that everyone’s ideas radically differed from one another?

We ultimately decided to take the plunge because we wanted to remain loyal to our values and management style and maintain a spirit of inclusivity. Plus, we knew that QIP employees hold high standards of excellence. Having worked together as a team for years, our values could not be too far apart. And if they were? Well, that would be a learning experience that would make our company stronger.

A six-step process for crafting core values with employee input

At a company-wide retreat in fall 2017, our 26-person team gathered in a hotel conference room and engaged in a multistep process. The process began with presentations and group activities that provided contextual information about core values and concluded with the development and refinement of our core values.

Step 1. Understand that core values are not empty jargon. Using prepared PowerPoint slides, senior managers explained what core values should be—important and lasting standards and beliefs shared by a group—as well as what they often, unfortunately, end up being—marketing jargon that no one cares about or believes in. This web page inspired and informed the presentation, especially the cautionary tale regarding Enron. The team broke into groups and made up some fake, clichéd “values” so everyone understood what we do not want our core values to be.

Step 2. Learn that core values are not aspirational, accidental, or permission-to-play values. Senior managers defined other list items that would not be core values. For example, a value that a company aspires to but does not currently hold is not a core value. A commonality that arises by accident and is not actively cultivated is not a core value. And baseline standards of behavior (permission-to-play values) are not core values; this is because core values show how a company excels in contrast to its competitors, not ways in which it follows basic governmental laws and societal rules. This web page offers more detailed explanations on what core values are not. After presenting this information, we had the groups brainstorm examples of these types of list items that are not core values.

Step 3. Realize that core values are important and lasting standards and beliefs. After senior managers gave the team a thorough, multipart definition of what core values are, the groups discussed published lists of other companies’ core values. This allowed everyone to gain an understanding of the wide variety of possibilities. During this activity, employees noticed many similarities—and differences—between our company and the companies we discussed. We began to think about what makes us unique.

Step 4. Draft lists of core values. Armed with this contextual information, the team drafted lists of authentic core values that would represent QIP and differentiate us from other companies. Employees gathered in their traditional daily working groups this time. Each of the groups brainstormed a list to share with the full team.

Step 5. Combine and refine the lists of core values. We happily discovered that the groups, working separately, drafted lists that were strikingly similar to one another. Many of the words chosen by the groups were identical or synonyms, and nothing on the lists stood out as wildly divergent or unexpected. We were happy to learn that QIP’s culture truly does center around a few important principles that we all intuitively understand.

Step 6. Finalize and adopt our core values. Upon returning to our home offices, the Communications & Content group at QIP edited, proofread, and visually designed our new core values. Senior managers sent a polished draft to the entire company to request any last individual input. We took this feedback into consideration and made some minor changes. Finally, we adopted our core values and published them on our website.

Reflecting on the process and keeping the core values relevant

In the end, we were glad that we engaged in the multistep process of coming to a group consensus on core values, instead of imposing ideas from the top down. This effort gave everyone on the team a voice, and a stake, and we discovered that our team truly has the values we thought we saw at QIP.

Our next goal is to make sure our core values stay relevant. We plan to refer to them often in the future. This may happen during interactions within our team and with external clients and contacts, during recruitment and hiring of new employees, through our website and blog, on social media, and during annual performance reviews.

We can now confidently say that we nurture, promote, balance, celebrate, and commit—and this is what makes us QIP.

A text version of these values are available on the Who We Are page.

◀The World Is Changing . . . What’s Your Resolution?
Deep and Shallow Work: Why Both Are Brain Essentials▶